Are They Playing or Fighting? 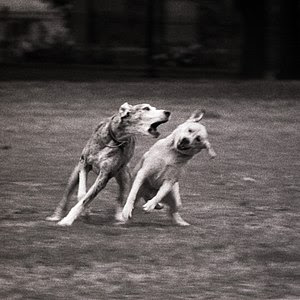 Image via Wikipedia
Playtime among dogs can look like a competitive match. Whether you take your pet to a dog park or arrange play dates with neighbors’ and friends’ dogs in a safe, fenced-in area, you should learn what healthy play looks like. Normal dog play can look rough and tough—you may hear some yipping (but not yelping) and a bit of growling (sing-song growls, not low nasty snarls). That’s the sound of happy dogs interacting and taking turns talking back to one another. Monitor sounds, and if you notice urgency or aggression in dogs’ voices, run interference. Leash both dogs and stop the play session.


Pay attention to dogs’ body posture. They will take turns being the “alpha” on top; they will alternate chasing. A submissive dog will introduce himself by laying on its side or crouching so the other dog can sniff and “meet” him. The shy dog should come out of his shell if play is healthy, acting as an equal participant in the jumping and chasing.

It is healthy for dogs to play in a sort of dancing pose, standing on hind legs in an embrace, where one dog is the lead. As long as they take turns being the lead, or alpha, the couple can dance all they want!

Monitor dog play, especially when your dog is meeting a new friend. Here are some danger signs to watch:

• Over-Domination – one dog is clearly in charge and aggressive, not allowing the other to chase back or take a turn being on top during some playful wrestling